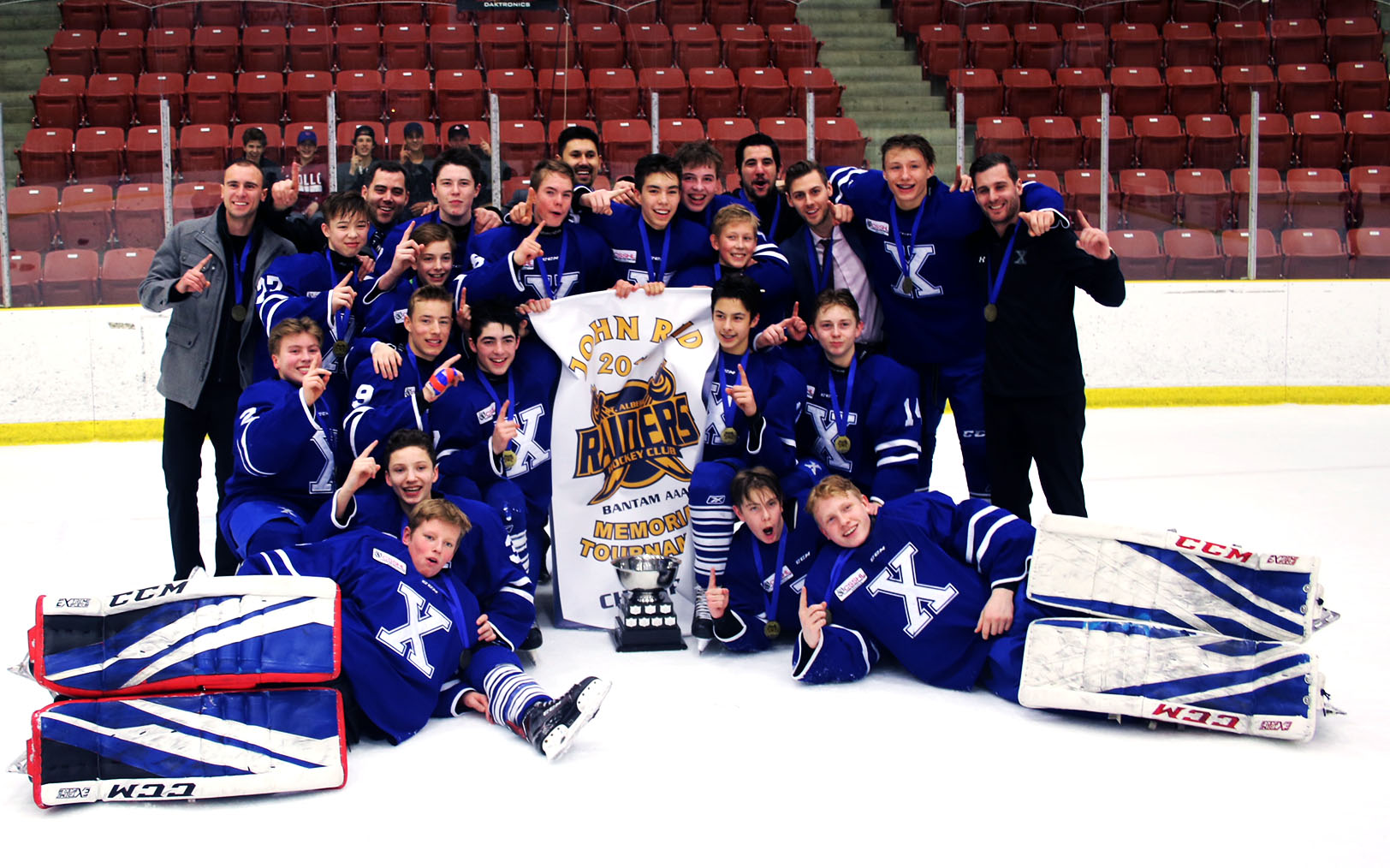 In their inaugural season, the Northern Alberta Xtreme (NAX) Bantam Preps were crowned champions of the 40th Annual John Reid Memorial Tournament, one of the most prestigious hockey tournaments in Western Canada.

Despite the fact the Bantam Preps are in their inaugural season, the third year of existence for the NAX program, it was their third straight tournament finals appearance, and second win, having already beat OHA Penticton 6-2 in the Chilliwack Challenge Cup. Their other finals appearance was a 5-4 shootout loss to the LA Junior Kings in the Rocky Mountain Classic.

This year’s tournament, which takes place every year in St. Albert, saw 16 teams comprised of players born in 2003 and 2004 competing from British Columbia, Alberta, Manitoba, Phoenix and Los Angeles from January 18-21.

“We approached it as a good opportunity to see where we’re at compared to the other top teams in Western Canada,” said head coach Tyrel Spitzer. “Test our mettle against the rest of Western Canada and put our best foot forward.”

This tournament has become a can’t miss for Western Hockey League scouts and team personnel as well as some NHL scouts looking to see potential superstars in the making. Last year more than 100 junior scouts were in attendance.

NAX opened the tournament Thursday morning with a 2-2 tie against Airdrie. But as the tournament wore on a trend began to form, NAX was just saving their best for last.

Friday would see a rematch of the Chilliwack finals as NAX once again beat OHA Penticton 6-2. The two teams were tied 2-2 heading into the third period before NAX would score four to pull away.

Later that night, against an underdog Sherwood Park team, NAX would once again score four third period goals to build on a 2-1 lead and win 6-1.

The lopsided victories meant a first-place finish in the Iginla Pool - Remax-Brian Cyr Division, and a quarterfinals berth against Yale Academy from Abbotsford B.C.

Once again NAX would need some third-period heroics, as Jack Parker would score with 12.9 seconds left to force a scoreless overtime. A Zac Ostapchuk goal and Lochlan Gordon save gave NAX a 4-3 shootout victory, and a spot in the semi-finals.

As they had all tournament, NAX found themselves in another tight game heading into the third period. An early goal from Rink put them ahead 3-2, but like they did against OHA and Sherwood Park, NAX would score four goals, rallying to overcome the deficit.

Dylan Guenther would score with 11:26 left in the third period to tie the game before Zac Ostapchuk would score the game-winner 21 seconds later. NAX would go on to score two more, including a Guenther empty-net goal, to earn a 6-3 victory and a spot in the finals against the LA Junior Kings.

On Saturday night, after the conclusion of the semi-finals, NAX forward Matt Savoie was named an Iginla Division Allstar as well as the tournament Top Forward Award with 15 points through 5 games. Savoie would add two goals and an assist in the finals bringing his tournament lead to 18.

Along with the individual matchup of Savoie verse Bonrouhi, LA had just beaten NAX at the Rocky Mountain Classic and had not yet been beaten by anyone north of the American border.

It was also an opportunity for three former St. Albert Sabres to win the John Reid on home ice in front of family and friends. Ostapchuk and defensemen Marc Lajoie played for the Sabres last season, along with Savoie, who spent the 2016/17 season with the team playing as an underage player.

These three players would play critical roles in the final minutes of the NAX victory.

For the third straight game, NAX found themselves trailing 3-2 in the third period until Lajoie, son of University of Golden Bears head coach Serge, made a nice read in the neutral zone forcing a turnover. Savoie pounced on the loose puck and was off to the races, beating Bonrouhi with a shot low blocker to tie the game.

Exactly seven minutes later, with 3:49 left in the game two Sabres would once again team up to send the mostly NAX crowd into a frenzy.

A great back-check by Lucas Ciona once again caused a neutral zone turnover. This time it was Ostapchuk who picked up the puck and found Savoie backdoor on the 2-on-1. Savoie made no mistake burying his second of the night, blowing the roof off St. Albert’s Go Auto Arena.

An empty-net goal by Guenther, the tournaments leading goal scorer, with 32 seconds remaining ensured the best third-period team in the tournament would win gold and become the first Canadian team to beat LA this season.

“That’s a really special team over there, they should be proud of their performance,” said NAX head coach Tyrel Spitzer. “But it feels pretty good for our team, the way they bought in all weekend and to hand LA their first loss up in Canada, that’s pretty special too.”