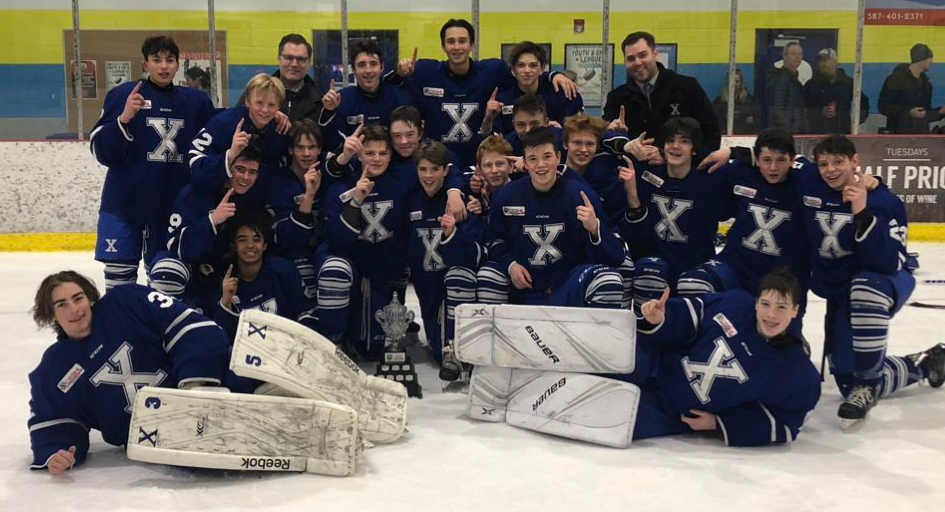 After falling in the semi-finals last year in the tournament’s inaugural run, the Northern Alberta Xtreme Bantam Prep team bounced back in the second showing of the Western Canadian Crown (WCC) Elite Bantam Invitational with a 5-1 win over Edge Academy (Calgary, AB) in this year’s finals.

Hosted and run by NAX, the WCC tournament ran January 16-19, 2020 with 16 teams competing for the championship. Last year 12 teams gathered in Edmonton at the River Cree Twin Arenas with the Lethbridge Val Matteoti Golden Hawks defeating NAX in the semi-finals, before besting Delta Academy White in the finals.

With the John Reid Memorial Tournament taking place the same weekend in St. Albert, the tournament was started last season to allow teams the opportunity for extra exposure with WHL scouts from Western Canada already in the Edmonton area.

“We started the tournament to create opportunities for exposure for Bantam aged players and we saw the opportunity to support local charities,” said NAX Head of Hockey Operations Tyrel Spitzer.

For the second year in a row the WCC donated all proceeds to the Make-A-Wish Northern Alberta branch. This year’s donation was $3,250.00, nearly $1,000 more than last years.

In Pool A with the Sherwood Park United Cycle Flyers, Northeast Wolfpack, and GPAC Golden Arrow Storm, the Xtreme started the round robin with a 6-1 win over Sherwood Park. They followed that up with a 9-2 win over the Wolfpack before facing 2-0 GPAC, with the winner clinching first place in the pool. A 4-1 win against GPAC secured a 3-0 round robin for the Xtreme, outscoring their opponents 19-4.

Notre Dame’s magic would run out in the quarters as the Xtreme would win 9-2 to advance to the semi-finals against Rink Academy. NAX would once again come away victorious, this time with a 5-0 win.

An Edge win in the other semi-finals against BWC Academy set up a Battle of Alberta in the Championship game. While the teams have played multiple close games this season, the outcome of this one was never in doubt as NAX secured a 5-1 victory.

“I really liked how they came together and played a complete team game from start to finish and they didn’t take a game off,” said head coach Steve March. “It’s a really fun group, they’re dynamic and a lot of fun to watch.”

“It was a great experience winning that trophy. Lots of players on our team haven’t had that experience in a long time so it was good for us to get a championship again and hopefully we can carry that into playoffs,” said forward Colin Doherty, one of only two players on last year’s team.

The NAX Bantam Prep team has 11 CSSHL league games remaining before they head to Penticton, B.C. for the 2020 playoffs.