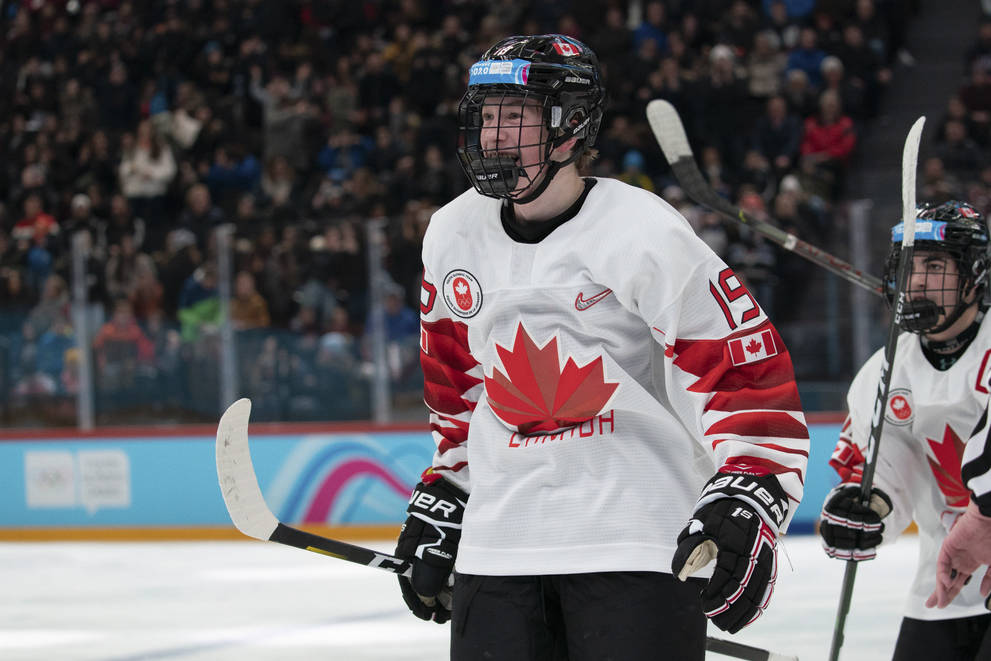 The Red Deer, Alberta native was the fifth overall pick in the 2019 WHL Bantam Draft by the Brandon Wheat Kings and has spent the 2019/20 season playing with the Devon based NAX Midget Prep team.

Seventeen 2004-born players, including Danielson, represented Team Canada from January 9-22, 2020 at the third running of the Winter Youth Olympics.

“I was at my billet house and I was finishing up some homework and I got a call and I got told that I made the Youth Olympic team. I was mostly just shocked and I was super, super happy. I just had no words,” said Danielson. “I had no clue (about the Youth Olympics) until about August.”

“It’s great to see such a motivated and dedicated player get rewarded and have the opportunity to represent his country and play at the Youth Olympics,” said NAX Midget Prep head coach Matt Tassone. “He has high end hockey IQ and the skill to go with it, he can make plays out of nothing.”

Six countries competed in the Ice Hockey Youth Olympics with the United States, Finland and Switzerland playing in Group A, while Canada, Russia and Denmark made up Group B.

“The games were really fast paced and competitive all around. There was very little time to make plays and it was a hard-fought game every game,” said Danielson. “It was tough to get used to playing on the big ice being used to regulation size but it was a lot of fun to play on that.”

Canada started the tournament with a 6-2 loss to Russia, a game which opened Danielson’s eyes to the talent of the players around the world. “My biggest takeaway was just how good the kids in the world are and how much you need to push yourself if you want to be one of the best.”

When asked who the toughest player to play against was Danielson noted Russian captain Ivan Miroshnichenko. “He’s a big, strong forward that has a really good shot and he’s tough to knock off pucks.”

Playing in games with 15-minute periods and minute-and-a-half powerplays, Canada finished off the round robin with a 6-0 win over Denmark, before losing to the United States 2-1 in the semi-final.

With a goal in the bronze medal game Danielson helped Canada defeat Finland 4-2 and secure a third-place finish.

After beginning the tournament as a dependable two-way forward, Danielson began developing into more of a playmaker and goal scorer for the team, finishing with two goals and an assist in four games.

“It was an amazing feeling to be able to score, it’s a feeling I’ll never forget. I wanted to make a name for myself but I wasn’t really worried about that. I was just trying to do whatever I could to help the team.”

Although on a team with a handful of players Danielson had never met before, he wasn’t alone in the experience as both of his parents joined him in Switzerland. “It felt great to have them watching me. It’s always great to have support when you’re playing somewhere that you’ve never played before and you don’t know a lot of the people there.”

Danielson said he received positive feedback from the coaching staff, led by head coach Gordie Dwyer, as well as some critiques to help him reach the next level.

“Just that I needed to work on my quickness off my first three strides and keep working on my shot.”

Overall Danielson enjoyed the experience and was honoured to play for Canada.

“The atmosphere in the rink was unbelievable. It was awesome to make friends from all around Canada. It’s always good to play with people you haven’t played with before. It felt really good and it was an honour to play for my country.”

“I just tried to take everything in, and cherish the moments you have when you’re playing in big tournaments like that.”

Danielson and the NAX Midget Prep team currently sit in first place in the Canadian Sport School Hockey League and will look to win their third-straight league title when playoffs begin in early March.